When the power goes out....

It was a crazy, windy morning and we actually lost power for about a half hour. So what does one do when the power goes out? Hurry up and stamp a card!! Wohoo!!!! 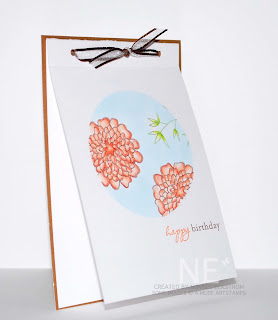 Stamps: 2-4133E Open Zinnia, 2-4137E Leafy Vine, 9-8251B Happy Birthday Mix
Papers: white 4-bar, bark 4-bar notecards
This card design kind of came out of necessity. I started out by punching a large circle out of some lightweight paper. I used it as a reverse mask and stamped the two Open Zinnia images, then the Leafy Vine. The zinnias were stamped with Memento Brown and the leafy vine with Memento Bamboo Leaves. Before coloring in the images with my Prismacolor pencils, I kept the mask in place and inked the empty spaces with a dauber and Colorbox Ice Blue Chalk ink. Once I had the coverage I needed, I removed the mask and colored in the flowers.
Now here's where the necessity part came in....I goofed up on the first try and had to flip the card over and start again. I liked the second try so much I didn't want to waste it. So, I trimmed down the white 4-bar notecard and adhered it onto half a Bark 4-bar notecard! I thought it needed some more so I scored across the top of the white notecard, punched some holes, and added some ribbon.
I think I'm going to give this card to my co-worker, who is celebrating a birthday at the end of April. I hope she likes it.
Just had to give a quick shout out to my oldest son's baseball team. Had our first game last night. Two out-of-the-park homeruns!!!! My son's friend, Tristan, was the next up to bat. My son told him, "If you hit a homerun, I'll give you 5 bucks!" Well, Tristan has never hit a homerun but that ball went sailing out of the ballpark, straight past centerfield and landed in between two parked trucks (with the people inside). It was beautiful!!! Shortly after, my former neighbor, Tyler, also hit an out-of-the-park homer! Way cool! Great job, guys!
Posted by Novell at 1:24 PM

What a great card!

This is so so pretty!! Love the circle!!

I love this! The cirlce is great, I am gonna have to give this a try!

This is sooo gorgeous!! I love everything about it!

I love it! Great card.

I have so got to try this, Novell! It's beautiful! I love the colors, the design, and everything about it!

This is beautiful! Very nice "save", also! It really enhances the colors of the flowers. What an exciting game!

love this idea, such potential to use this technique with all shapes of punches

Love it when you can "save" a card from certain recycling! Great card Novell!

I love this card! I love it when second attempts produce good results! This is great, the soft blue on the zinnia background is beautiful.
Cute story about your son's baseball game!