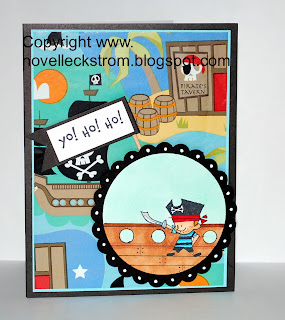 Today I had to make 3 birthday cards for a party. My nieces Cassi (14) and Sabrina (9), along with my great-nephew Max (4), celebrated their birthday at the local roller skating rink. Cutie pie Max turned 4 and I found a fun little pirate Playmobil set for him and thought my little Errol stamp from The Cat's Pajamas would make a great card for him. I had some cute pirate wrapping paper that I bought at Target so I used some to make the card, having got the idea from Leigh O'Brien's blog. I kept things pretty simple because he is 4, after all, and could care less what the card looks like. I actually drew in the planks and the side of the boat with a Copic multiliner and a ruler. 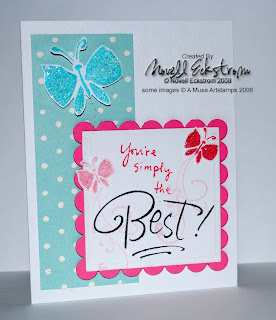 Now this card, that I made for Sabrina, looks a lot better in person than I could capture in the photo. I used a combination of the blue kitchen paper from A Muse, Pink paper from Stampin Up, the butterflies and sentiment from Inkadinkado, and the flourish trail behind the small butterflies from Memory Box. Princess Sabrina loves glitter so I made sure to sparkle up the butterflies for her. 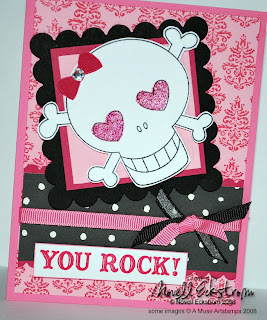 The piece-de-resistance, though, is the card I made for Cassi. I put a lot of effort into her card because she's a little older and she really enjoys stamping with me from time to time so I knew she would appreciate it. Before she opened it I told her I worked really hard on her card and she wasn't allowed to throw it away....ever. haha. She loved it just like I thought she would. For this card I used Stampin Up papers (with exception of the A Muse black kitchen). This 'Just Jawing' set is the only set I've purchased from the new catalog and I got it when a friend had a party. I love it! The awesome background stamp is from B-Line Designs. Isn't it cool?! Inside, I tucked in an iTunes card. 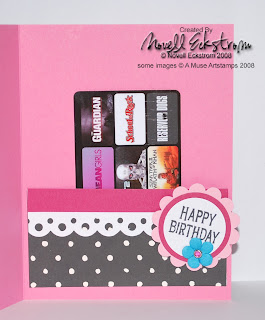 ETA: the scalloped punch is one of the new Martha Stewart border punches. It's called Scallop Dot.

Novell, these cards are great! And I love how that Target wrapping matches for the pirate stamps perfectly!

I've been fighting the urge, but you've convinced me that I need that Just Jawing set. Enabler!

These are ALL awesome!!! I Love the detail on the little pirate one...you are so talented. Is that a new border punch on the card you made for Cassi?

Ha ha...and I do love the pirates "whiskers"...hee hee...that is too funny! Thanks for the "shout out"...that wrapping paper is sooo cute and perfect for the pirate stamps!

All the cards are FAB!!! The pirate ship you drew is amazing!!!

These are all SUPER CUTE!!!!