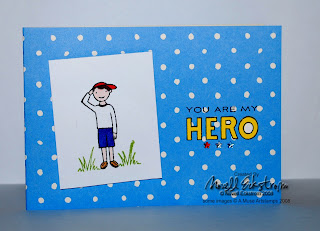 If you follow the A Muse News blog you know A Muse has teamed up with Operation Troop Aid to put a handmade card of appreciation into the hands of as many deployed military men and women as possible. A Muse is calling their part in the effort Operation Hero Mail. I am so proud to be a part of this because I'm a brat....a Navy brat, and I'm proud of it! My father served a 20year career in the United States Navy and fought in the Korean War. Many of his brothers also served some time in various branches of the military and one of them, his oldest brother, died in World War 2.

Won't you join in the effort to support our troops by participating in Operation Hero Mail? A Muse has created several card-making kits that make it fun and easy to do so. Stay tuned and watch for details to be released on the A Muse blog sometime today and show your support by purchasing one of these kits.
Sorry about the poor lighting in the picture! It's not quite sunny yet.
Posted by Novell at 8:23 AM

How cute is he saluting!!! I can't wait to order my set!

cute card, Novell! I'm a brat too (although an Air Force one!!)
Loved your halloween card yesterday too!

Love it! DH is in the Navy and we've got four brats of our own!:) And I mean that in the kindest way...Still stalking and waiting for those kits to appear on the blog!!

Love that yellow h-e-r-o! it really pops on your card. Nice!!!