So I signed up for two ATC groups with Lee Anne but I can't stop making them! This week I'm going to share some fun ATCs I created. Some of them I like more than others but I'm going to share them all anyway. Keep in mind, these are my prototypes. This means I put them together, often using scraps so you might see lines where two scraps of the same color meet. I won't share the ATCs I created for my swaps until everyone in the swap has received their stuff. 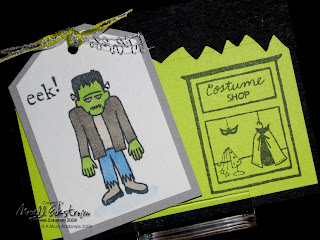 For this fun little ATC I used a base of black notecard sized 3.5" x 2.5." On that I layered some lime peel notecard sized 3.25 x 2.25. Then I cut a strip of black cardstock using my grass decorative scissors by Paper Shapers to mimic the hairline of Frankie. I stamped the Costume shop directly onto the lime peel, then stamped Frankie on a separate piece of white cardstock and trimmed it to a tag. I layered that onto some gray cardstock, colored in the image, added the sentiment (just used the eek! part of the eeeeek! sentiment), and added some ribbon.
Now go make some ATCs. Better yet, make sure you are signed up for the ATC swap!
Posted by Novell at 7:16 PM

Very cute! I am loving ATC's as well. They are so much fun to make.

This is super cute!! Love those grass scissors!!

This is adorable!!! I love how you used the scissors!!!