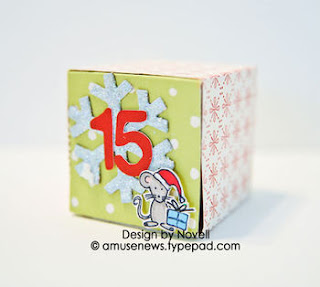 Yay! It's finally my turn for the advent calendar today. Here's the pic posted on the blog today and a link for you to either catch up or continue to follow until we hit Christmas! The snowflake was diecut at my LSS and I've had it in my stash for a while. I used some Making Memories scrapbook paint to make it blue, then covered it in glitter. The numbers were diecut using my Slice!

Got my holiday baking done...now to divvy it up, take pics, and give it away. I think I went through about 8lbs of butter. No joke! I made 11 things, most everything as a double batch. My table is covered with storageware full of goodies. Now I'm working on the tags with my A Muse clear baking set, of course! At $14.99 retail, that set's a steal!

I have a sickie at home today. We got quite a few inches of snow over the weekend but I have no pics of my kids in it. They are weirdos and won't go play in the snow. I wouldn't have let my sick one out anyway, but the other one is just an old man in a little person's body. As a matter of fact, I went to another jewelry party the other day and a guest was asking me how I knew the hostess. I told her my oldest son is friends with the hostesses youngest son. She asked what my son's name was and said "Oh, yeah! I know him. He's like an old man!" LOL. She definitely had him pegged. Anyway...I digress. School is delayed today due to the sheets of ice on the roads but I'm keeping sickie at home with me. I think I'll take him to the doc just to make sure it isn't strep. My kids are so seldom sick that I have no idea what the symptoms of strep are. He has a wicked cough and sore throat, though.
Have a great day. I look forward to sharing my baking pics with you. Warning! You might gain a few pounds looking at them!
Posted by Novell at 7:52 AM

Wish I was on your list to receive baked goods. I don't do much baking anymore and miss having freshly baked anything! Your box is really cute too. That snowflake is really great!

I love your advent box---& I JUST posted on my blog--hilarious that you chose to comment today! :) Hope all is good with you! Happy Holidays!

OMG!!! Thanks for the shout out you gave me on your blog. I've been out of town the last few days and my internet services was going haywire. Luckily I figured out how to post my entries ahead of time. Thanks again. Love your blog.
Laura

I saw this one in person and it even cuter (if you can believe that). Thanks for sharing!

This is so sweet! I love the cute little present he's holding!