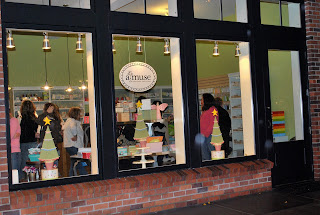 The much anticipated A Muse Cupcake Social and Instructor Training event took place this past weekend. Many of us started the day with a Copic Certification Class with Marianne from Copic. It was a lot of fun but lunch was a bit of a disaster. Poor Geeta and Heather's lunch orders were missed so they had to take theirs to go. Afterward, we had some time to sit and eat some pizza, get to know each other a bit, then the doors opened for the Cupcake Social! 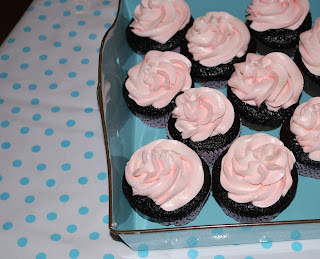 Cindy, from the A Muse shop, made the most delicious cupcakes for everyone. I don't know how she made the frosting but it was fluffy, glossy, and super yummy! There were chocolate and vanilla cupcakes with their tops a little different....just like what you can do with the new A Muse Cupcake Builder set!

The social was a great way to meet some local A Muse fans, and some not so local, too. Lovely Ingrid flew in from GA to meet us! I don't know what happened but I failed to get a picture with her. I felt like I was in lots of pictures, but I guess they weren't taken with my camera. If you have some pics, send them to me! Anyway, this is a picture of Michelle Clark, Linda, Nicole, and me. Nicole used to come to the shop once a week and would come take my classes sometimes but she moved and it's not so convenient. Her hubby was nice enough to let her get away, despite having the kids for most of the weekend on his own anyway, so she could come hang with her peeps. I met lots of new folks, too. There was a fun make-n-take, and customers went home with some fun goodies. 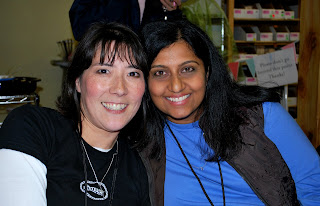 Saturday started our training event. We had almost all the A Muse Instructors and Designers in town for this (we missed you!!!!). What a fabulous opportunity to meet the women we've come to know online. For me, it just served to strengthen my bond with them. Every single one of these women were nice, friendly, and eager to be there with each other. I was so excited to meet all of them. We learned lots of new things. The weekend ended with a sappy Julie, who pretty much made all of us tear up. It truly is a priviledge and an honor to be associated with this fabulous company called A Muse. A big shout out to all the customers who showed up for the Social and most especially to the A Muse Crew for putting on the most spectacular weekend.

What a truly awesome summary of a memorable weekend! It was such an honor to get to sit across from you, Novell- I have been a big fan of yours since "discovering" A Muse! The only downer to the weekend is that it went by so quickly! Take care!

You really said it ALL so well Novell! It was so great meeting you and all the "Muses" this weekend it was just a wonderful time!

Novell what a great post! You made me almost tear up. How fun and exciting it must've been for all of you creative spirits to unite at the A Muse HQ! It was SO fun to meet many of the A Muse ladies in person - it REALLY does make a difference! Miss you so much - hugs!

Sarah of Bucket and Company said...

So nice to finally get on your blog - it's Sarah from Whidbey's. Very cool stuff you have going on here :)

I have something for you over on my blog:
http://resigntodesign.blogspot.com/2008/11/kreativ-blogger.html

You know because you are so fly!

Hey girlfriend! I had a great time getting to know you a little...and the other girls too. Thanks for getting me to the store in one piece! ha ha ha!!! You 'da bomb!!

Just poppin in to say hi! Was great to hang out with you again - hugs!