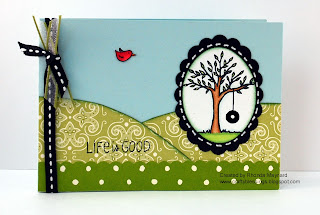 I received this awesome birthday card from Rhonda and just loved the Green Madeira used as the grass with the Green Kitchen on the Cabana blue-ish cardstock. Well, on Monday I had to drive to Orondo, which is out near Wenatchee, WA otherwise known as 'apple country.' It was a gorgeous drive up through Stevens Pass, Leavenworth (a cute little Bavarian style village) and then through so many apple orchards. Rhonda's card totally inspired me with this creation. 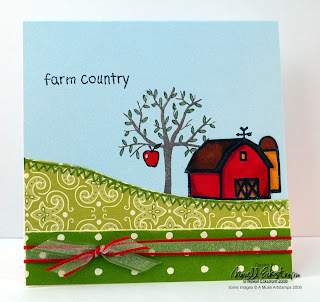 Now I totally could have used the farm house from Saltbox Studio, but it is facing the opposite direction and quite frankly, I didn't pull the sentiment from the Saltbox mini banner set until after I had created the rest of the card. I stamped the A Muse farmhouse onto the Cabana Blue notecard, then again on a separate piece of white cardstock, colored it, cut it out, then mounted over the first stamped image. The pinking along the grass is from the A Muse Fancy Borders clear set using Memento Bamboo Leaves ink. You can probably figure out the rest.
I would love to see any cards you have created that were inspired by a fellow A Muse fan. Feel free to share a link by posting a comment in the comment section.
Posted by Novell at 2:43 PM

That barn card is so cute! Really! I love how you used your paper and your placement of the barn. Wow.

This is super cute Novell! I love Rhonda's card too!

these cards are so great. I love them both. great art work Novell.

How cute! Your card totally captures the essence of the Wenatchee area!! Love it!! I feel so special that my card inspired you to make this fabulous creation!! :D Thanks for making my day!!

I hope your birthday was wonderful!!!